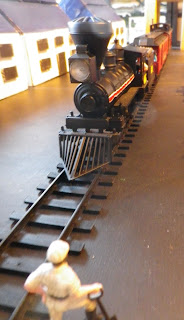 Following careful negotiations with honest American suppliers, the Minister of Railways was able to announce the arrival of the first of the new (or at least only slightly used) trains for Freedonian Republican Railways.  At last the railway system of Freedonia is being brought further up to date!

The first locomotive arrived in a fanfare of publicity and the cheers of enthusiatic bystanders. 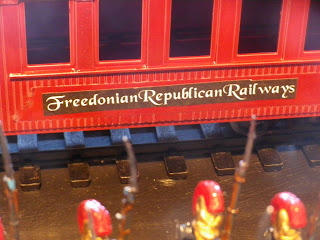 It is apparently to be named "The Meteor",  it arrived today  at the newly constructed railhead in the Capital, and was greeted by the Presidential Guard and the new Army Corps of Bandsmen. 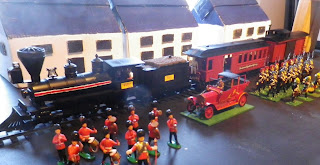 The Minister of Railways, Mr Ravelli said "Issa what I said - one luvvery choo choo.  Issa very fine choo choo, you bet."
The Finance Minister is reported to be in a stable condition and is expected to regain consciousness very soon. 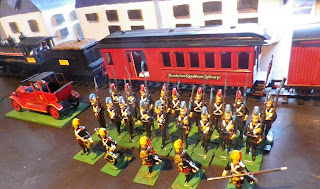 The new locomotive will be running special inaugural services out to the Bratuvian Frontier, and it likely to be used to ferry supplies and tractor parts to that troubled region. 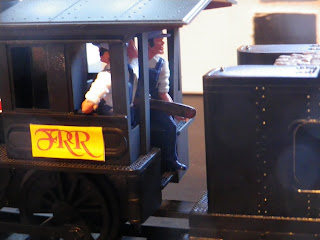 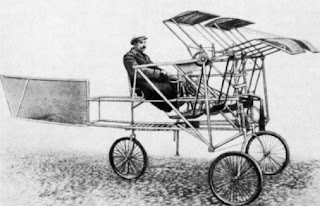 Following reports of the development of heavier than air flying machines in France, Germany and Britain, the Ministry of Agricuture and Science has announced its plans to start developing its own program to construct the first Freedonain powered aerial craft. A spokesman said  "Freedonain Science is the best in the world - we'll have these things working in a couple of weeks, no problem."

There have been some reports already of unidentified aerial craft in the skies of Freedonia, and conspiracy theorists are suggesting that the first Freedonian Flying Machines might already be in service.

Government sources are poo-pooing the suggestion.

Posted by Simon Shakewell at 10:32 No comments: 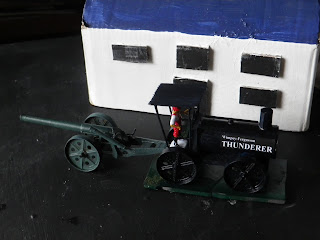 Ever at the forefront of military technology, the Freedonain Army has today taken delivery of its first powerful Winpey Fergusson Military Prime Mover.

Built around a state-of-the-art WF Steam Engine MkXIII, with an integrated double reverse framistate control system - the first of these mighty machines is destined for the newly formed Freedonain Engineer Corps, and will be used to haul large guns, heavy loads and the like in battlefield conditions. 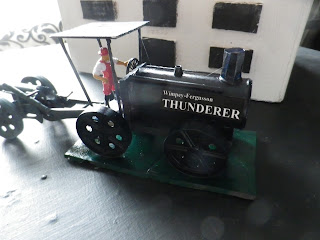 The new machine, christened 'The Thunderer' by the President Himself in an official ceremony Outside the Presidential Palace.  This wonderful machine was purchased under a revolutionary private financing deal with the manufacturers Wimpey Fergusson.  Wimpey Fergusson are well known for their high quality heavy engineering products such as steam engines, railways, armaments and  agricultural machinery and at very competitive prices, the President said.

The increased mobility that the new 'Thunderer' will give our Brave armed forces will allow the formation of a new 'Mobility Corps' equipped with cavalry, the powerful steam car and a light petrol car (when not being used on Presidential Duties).

The Freedonian Parliment today approved a major package of investment in the Freedonian railways.  In his speech on the subject the President said "For many years now our national railways have been a joke.  I can't remember the last time I saw a train. Well it is high time our trains ran on time.  Or at all really.".

The Minister of Finance reportedly fainted when the huge cost of the project was announced.


Mr Ravelli, the Minister of Buying Trains said "Looka, you wanna nice choo choo, well I getta nice choo choo, donta you worry about that none".  According to sources close to the government, it is likely that the new railway will be equipped with some old US-build wood burning locomotives.
Posted by Simon Shakewell at 08:35 No comments:


The Maharaja of Clewgistan has recently announced an increase in trade tariffs on goods coming from Freedonia, and his close advisor the Grand Vizier Dendristi, has been making inflammatory speeches to the hill tribesmen of that far-off land.

As a result the easily inflamed  tribesmen launched unprovoked attacks on the trading post of the Wimpey Fergusson Machine Tools and Tractor Parts Company located in the foothills of the Clewg Mountains.


This post is gallantly defended by the Wimpey Fergusson Company Guard Battalion, and news has not yet emerged as to these gallant troops' safety or otherwise.

Clearly this is an affront to all right thinking Freedonians.  As our revered President Firefly said to Parliament "... this is an outrage!  I have principles you know!  And if you don't like them I have others!.  This may mean war ..."

The Silvanians have officially denied having anything to do with the uprising.  But they would say that wouldn't they?

The Freedonian Institute of Science and Agriculture has been receiving reports from astronomers, in particular the famous Professor Kokintz, who have been reporting unusally atmospheric disurbances on the surface of Venus.  The famous Professor said "...zey look just like ze little poofs, you know..."

A spokesperson  for FISA said "...despite wild speculation, we can officially state that the chances of anything coming from Venus is at least 100,000 to one."

Posted by Simon Shakewell at 15:14 No comments:

News is coming in of the militaristic Silvanians ruthlessly expanding their military might with the formation of a new Regiment of 'Rangers'. 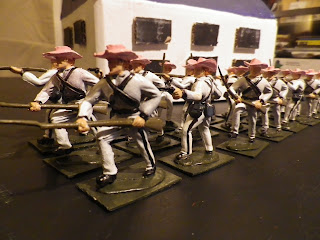 Allegedly, these troops are trained to operate in the rough and mountainous border regions, and (according to the Silvanians) they are an 'elite' unit capable of living off the land and skilled in long range operations.  Obviously they would have to be able to live off the land due to Silvania's famouly useless logistic train. 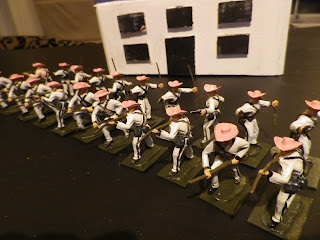 The Rangers, or 'The Rosehats' as they are known to many are skilled at cowardly manoevers such as ambushing and outflanking, and there have been many a brave Freedonian border guard who will have been assaulted roughly from the rear by these so-called 'Rangers'.

The Sound of Distant Drums
News is just reaching us of further unrest in the Darkest Africa where Freedonian Missionaries and Traders have been bringing the delights of civilisation to the savage inhabitants of Bonkhobonkholand.
The natives are becoming very restless and there is a concern that they might not want to be made to wear proper trousers and eat Freedonian Lasagne like civilised chaps.  Where will it all end, one wonders?
Posted by Simon Shakewell at 09:00 No comments: 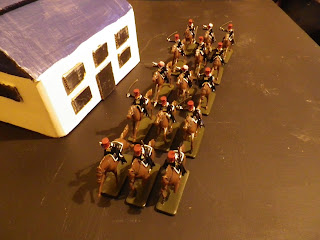 There was much cheering and jollity throughout the brave Republic of Freedonia of the news that Freedonia's defence is further enhanced by the formation of a highly trained body of cavalry.  The Rose Growers Federation of Freedonia spokesman said "... this can only be good news for our roses ... " 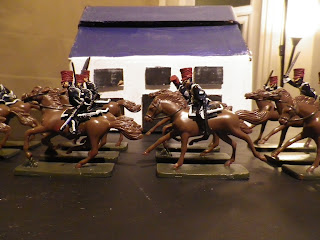 This is going to be one in the eye for those Silvanian Ruffians over the border.  No more will they dare threaten our way of life, land and womenfolk now that the brave boys of the 1st Cavalry Regiment can hunt them down like the weasals they are (once the weasal hunting season starts anyway).
Posted by Simon Shakewell at 14:50 4 comments:

The Battle of Kempshott Drift

In a rare outbreak of cooperation, the Freedonian and Silvania Armies had set up a joint logistics effort for a campaign against the troublesome hill tribes of Clewgistan.  This base was a small village near the strategic river crossing of Kempshott Drift.

The ammunition depot, and wagons were getting ready to move when scouts reported a shocking development, a strong force of the Bosrovian Army was approaching the drift.  The Bosrovians, whilst not formally at war with either Freedonia or Silvania, claims that it has a legitimate national interest in Clewgistan, and claims good diplomatic relations with the Maharaja of Clewgistan.   Freedonia also claims good relations with the  Maharaja, but,as is common in Clewgistan, political loyalties and the internal balance of power are famously..er..flexible.


The Bosrovians were clearly looking to conduct some unashamed looting at the expense of Silvania, and had therefore launched this surprise attack.

The Bosrovian raiding force consisted of
3 regiments of steely-eyed Bosrvian infantry
1 regiment of Bosrovian cavalry
2 field guns
The Bosrovian National Military Band
...And, much to everyone's surprise, a Bosrovian secret weapon was unveiled - namely Big Bessie the Bosrovian Bombard!
Not content with their own forces, the Bosrovians had engaged the services of a private military contractor from the Grand Duchy of Glevum.
The Grand Duchy forces, led by Colonel Asnac, comprised of:
3 regiments of surly mercenary infantry
2 regiments of murderous mercenary cavalry
1 gun.
Within a very short time, the enemy cavalry reached the Freedonian line and crashed in on their positions.. 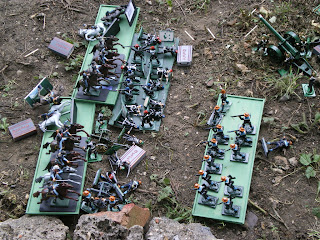 While the massive cavalry attack on the left was takin gplace, the Bosrovian cavary started their assault on the right flank - faced by the brave, but overmatched Silvanian infantry.


Back at the left flank, the saliers fail to stop the tidal wave of enemy cavalry, and commandeering a wagon, and the remnants of the militia regiment formed a last ditch redoubt.

Brigadier-General Tankerville quickly turned the Guard to protect the threatened flank, and their artillery helped to save the day

The losses from the cavalry attacks, together with the heavy bombardment , and the approaching waves of infantry led General Tankerville to take the courageous decision to order the evacuation of the survivong wagons, protected by the surviving infantry.

The outcome was the loss of large stocks of ammunition to the Grand Duchy (who will no doubt sell it back to Freedonia on the black market).
The battle of Kempshott Drift was not a good day for either Silvania or Freedonia.


Posted by Simon Shakewell at 11:04 No comments:

Freedonian Logistics the Most Modern

Following some comments in the gutter press about the state of Freedonian logistics, the military have been busy planning their next big enhancement to the capability for the Freedonian Army.
After prolonged fact-finding tours of major transport manufacturing companies in the French Riviera, Greek Islands and the Costa Del Sol, Mr Ravelli, minister for army procurment has returned with not one, not two, but FIVE tranport wagons.
Mr Ravelli said "...these are number one topa notcha wagons.  My pal Pinky got them as a bargain."

As part of this new procurement, the Freedonian Military Medical Services have been given one of the wagons to create the new  Mobile Army Medical Yeomanry.  The MAMY is urgently recruiting doctors, and most importantly, nurses for this new Corps.
Other News
Reports have been coming in from remote rural Freedonain farming districts of 'Mystery Airships'.
One W. H. Hopkins encountered a grounded airship about 20 feet in length and 8 feet in diameter near the outskirts of Hickville, Outer Freedonia.
The vehicle was apparently propelled by 3 large propellers and crewed by a beautiful nude woman and a bearded man, also nude.  Hopkins attempted with some difficulty to communicate with the crew in order to ascertain their origins.  Eventually they understood what Hopkins was asking of them and they both pointed to the sky and "uttered some thing that sounded like the word 'Mars.'.  This is clearly the ramblings of a madman, or the effect over over-imbibing the fearsomely potent Silvanian Brandy, as there are no known airships of this type anywhere in the world.

Posted by Simon Shakewell at 10:50 No comments: